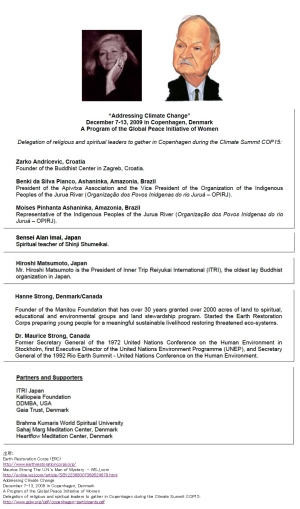 Maurice Strong, a Canadian, was born and educated in Canada. He has been working at senior levels for over 30 years in business, government and international organizations and now spends most of his time in China.

Mr. Strong is a Member of the Queen’s Privy Council for Canada.

Honors he has received include Companion of the Order of Canada, the Swedish Royal Order of the Polar Star, the Brazilian National Order of the Southern Cross, and Public Welfare Medal, the Highest Honour of the U.S. National Academy of Science, Tyler Environmental Prize, Blue Planet Prize and 53 honorary doctorate degrees.

Peking University Environment Fund (“PKUEF”) was established by Professor C S Kiang, the founding dean of the College of Environmental Sciences, Peking University (“PKU”). PKUEF is situated within PKU. It has its roots in China but with a broad view scanning across the world; PKUEF’s main goal is to contribute to the sustainable development, peace and security of China and the world. PKUEF has carefully selected action plans with both Chinese characteristics and world impact in order to integrate resources and build a platform for solving the most severe environmental and resource problems.
PKUEF aims to build a leading think tank and the associated infrastructure in the environmental field, promoting the strength of environmental studies at PKU and China as a whole, while seeking to develop comprehensive solutions for the utilization of resource, economic, and sustainable development, environmental protection and social harmony for China and the world.

Vision:
What China can do for the world in 21st century?
Learning by doing, PKUEF seeks to extend the wisdom of rationalism, naturalism and humanism to create a realm of harmony between man and nature.

Dr Rajendra K Pachauri assumed his current responsibilities as the Chief Executive of TERI (The Energy and Resources Institute) in 1982, first as Director and, since April 2001, as Director-General. TERI does original research and provides knowledge in the areas of energy, environment, forestry, biotechnology, and the conservation of natural resources to governments, institutions, and corporate organizations worldwide. In April 2002, Dr Pachauri was elected the Chairman of the Intergovernmental Panel on Climate Change, established by the World Meteorological Organization and the United Nations Environment Programme in 1988 (Re-elected in September 2008). IPCC along with former Vice President Al Gore has been awarded the “Nobel Peace Prize” for the year 2007. He has been appointed as Director, Yale Climate and Energy Institute from July 2009. He has been active in several international forums dealing with the subject of climate change and its policy dimensions.

He was conferred with the “Padma Vibhushan”, second highest civilian award, for his services in the field of science and engineering in January 2008 by the President of India.

To acknowledge his immense contributions to the field of environment, he was awarded the Padma Bhushan by the President of India in January 2001. He was also bestowed the “Officier De La Légion D’Honneur” by the Government of France in 2006.

Commencing his career with the Diesel Locomotive Works, Varanasi, where he held several managerial positions, Dr Pachauri joined the North Carolina State University in Raleigh, USA, where he obtained an MS in industrial engineering in 1972, a Ph.D. in industrial engineering and a Ph.D. in economics. He also served as Assistant Professor (August 1974-May 1975) and Visiting Faculty Member (Summer 1976 and 1977) in the Department of Economics and Business.

On his return to India, he joined the Administrative Staff College of India, Hyderabad, as Member Senior Faculty (June 1975-June 1979) and went on to become Director, Consulting and Applied Research Division (July 1979-March 1981). He joined TERI as Director in April 1982.

He has also been a Visiting Professor, Resource Economics, at the West Virginia University (August 1981-August 1982); Senior Visiting Fellow, Resource Systems Institute, East-West Center, USA (May-June 1982); and Visiting Research Fellow, The World Bank, Washington, DC (June-September 1990). Recognizing his vast knowledge and experience in the energy-environment field, the United Nations Development Programme appointed him as part-time adviser to its Administrator in the fields of energy and sustainable management of natural resources (1994-99).

Dr Pachauri taught at the School of Forestry and Environmental Studies, Yale University, USA, as a McCluskey Fellow during 6 September-8 December 2000. He has also authored 23 books and several papers and articles.

Cleantech Group Accelerating the next wave of innovation
http://cleantech.com/index.cfm

The Religion of Copenhagen
http://biggovernment.com/2009/12/26/climate-change-the-religion-of-copenhagen/

“Addressing Climate Change”
December 7-13, 2009 in Copenhagen, Denmark
A Program of the Global Peace Initiative of Women
Delegation of religious and spiritual leaders to gather in Copenhagen during the Climate Summit COP15:
http://www.gpiw.org/pdf/copenhagen-participants.pdf