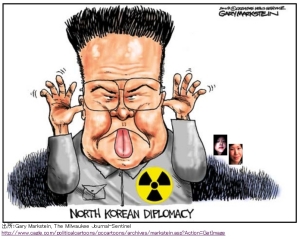 Q4: Why is the North Korean government doing this? Is it linked to the nuclear crisis?

A4: Contrary to most analyses, I do not think this is directly related to the nuclear crisis or that the two Americans are being held as a bargaining chip. Rather, I believe that the North Koreans are trying to use this case to demonstrate their resolve against perceived efforts by the international community to draw attention to their refugee problem. By sentencing these two harshly, Pyongyang seeks to establish a deterrent to international attempts to report on, or encourage, refugees leaving the country. In the midst of a leadership transition in which the current North Korean leader seeks to transfer power to one of his sons, the threat of North Koreans voting with their feet is perhaps the ultimate threat to the regime.